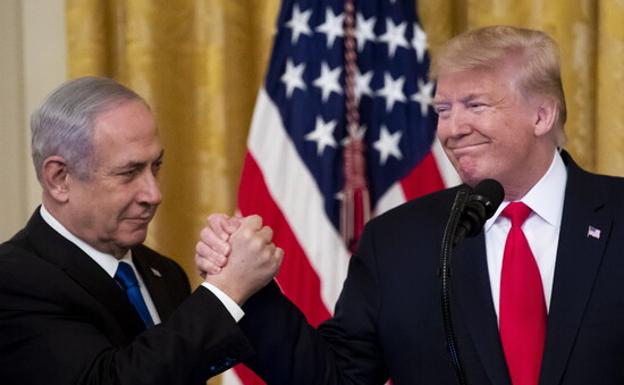 The objective of the committee created by both countries is to map out the territory that Israel would add to its borders in the framework of the so-called American Vision of Peace.

The committee set up by Israel and the U.S. to determine which part of the Palestinian territory could be annexed, as proposed in Washington’s peace plan, met today for the first time, and in the middle of the Israeli election campaign, in the occupied West Bank.

Acting Israeli Prime Minister Benjamin Netanyahu led the meeting of the team, which will consist of three U.S. and three Israeli officials, including U.S. Ambassador to Israel David Friedman.

The team’s goal is to map out the West Bank territory that Israel would annex under the so-called American Vision for Peace, which, according to the plan’s contents, would include Jewish settlements in that territory and the entire Jordan Valley on the border with Jordan.

Following a crossing of statements between Israeli and U.S. officials on when this annexation would take place, members of President Donald Trump’s administration made it clear that it could only take effect after the 2 March elections in Israel, which has had a functioning government for more than a year.

This meeting took place just one week before the elections – the third in a year – in which Netanyahu is gambling on his continuity in a post he has held for more than a decade, at the same time as he is facing legal proceedings for three cases of corruption.

While the current president has expressed his willingness to carry out the annexation as soon as possible, his main rival in Monday’s elections, Beni Gantz, said he would do so “in coordination with the international community.

“We are determining here lines that will have historical implications, that is why the work will be carried out as fast as possible, and we will not stop for anything”, Netanyahu said during the meeting.

For his part, Friedman said that they will start working “immediately” and that they hope to complete the map “in the most appropriate way for the State of Israel”.

The office of Palestinian President Mahmoud Abbas today condemned the meeting in a statement where he said that the map on which Israel and the United States are working has no legitimacy and stressed that the only valid one is “that of a State of Palestine on the 1967 borders with East Jerusalem as its capital.

The Palestinians have unanimously rejected the peace plan, which mainly takes up Israeli demands and, in addition to proposing the annexation of part of the West Bank, relegates the Palestinian state to a reduced territory with the capital in the suburbs of Jerusalem.